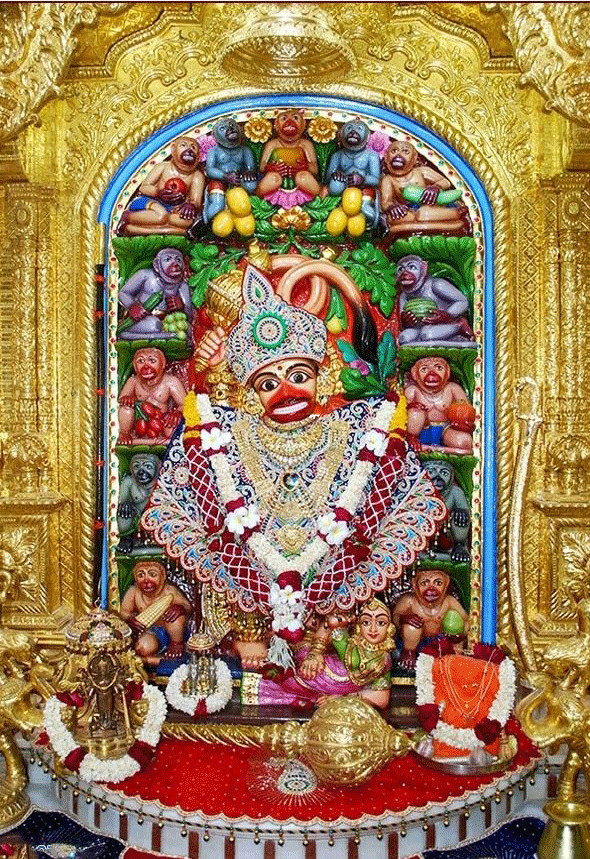 Sarangpur Hanuman Temple is open from 6 am to 12 pm. There is an afternoon break in darshan from 12 pm to 3 pm. The temple reopens again at 3 pm and closes at 9 pm. Mangla Aarti is performed at the temple in the morning at 5:30 am.

➤Tuesday and Saturday are devoted to Hanumanji, it is designated day for a special ritualistic for those affected by mental illness, stress and other disorder.

➤A special Shangar Aarti is performed on every Tuesdays and Saturdays at 7.00 am.

➤The evening aarti at Sarangpur Hanuman Temple is performed depending upon the sunsets.

Devotees chant the Swaminarayan Mahamantra while going around the Sarangpur Hanuman Temple.

Mangla Aarti: “Jai Kapi Balvanta” is the Aarti of Sarangpur Hanuman Temple. The Mangala Aarti or Aarti which takes place at 5:30 am is done by waving a piece of lighted camphor in circles around an idol of God. The Deities offer the first darshan of the day, signifying the auspicious beginning of the day for devotees.

Shangar Aarti: Shangar aarti done at 7:00 am is performed every Tuesday and Thursday mornings. Shangar means adornments. During this aarti, the Deities are dressed and adorned.

Rajbhog Aarti: During the Rajbhog aarti takes place from 10:30 am to 11:00 am. Royal offerings of the mid-day meal are offered to the devtas.

Sandhya Aarti: This aarti is performed during the evening depending upon the timings of the sunset. Devotees gather to seek the darshan of the deity and offer their prayers during the Sandhya Aarti.

Shayan Aarti: After the Shayan Aarti, the darshan is closed for the devotees. It signifies that the Deities are about to retire for the night.

The Shri Hanuman Temple located in Sarangpur, Gujarat is a sacred Hindu Temple dedicated to the Monkey God Hanuman who is fabled for his strength and physical prowess. Known as the Greatest Devotee of Lord Rama, Hanuman played a pivotal role in the Hindu epic Ramayan and it was with his help that Rama was able to vanquish the evil Ravana.

The Sarangpur temple comes under the Vadtal Gadi of the Swaminarayan Sampraday and the only temple in this category which does not have Images of either Swaminarayan or Krishna as the main deities. It is committed to Hanuman, who is worshipped here as the crusher of sorrows and revered as the main deity.

The image of Lord Hanuman in the temple is said to be so powerful that just a mere glance of the deity is said to cure people possessed by evil spirits. Even though, there are thousands of temples of Hanuman across the country, this temple is especially revered as one of the most sacred and holy shrines of the Monkey God. People from across the country and from all four corners of the world throng the temple to get Darshan of Lord Hanuman.

Shastri Yagnapurushdas was appointed to handle the affairs of the temple in 1899 and he is reported to have renovated the shrine, acquiring more land and adding new buildings in the premises. Considered as one of the prominent temples in the Swaminarayan Sampraday, the Idol of Hanuman was installed by Sadguru Gopalanand Swami in 1905. Legend has it that when the Sadguru was installing the Idol, he touched it with a rod which caused it come alive. This has greatly added to its mystique and several healing rituals are focused around this narrative.

The temple is located on a large campus where people can spend time to linger and take in the spirituality of the place. Special rituals are conducted on Saturdays, especially for those affected by mental illnesses and other psychological disorders. People throng the temple just to be touched by the energized silver Rod, fabled for its curative powers and which was used during the installation ceremony by the Sadguru. A Brahmin householder acts as the priest and conducts the rituals in the traditional way.

People with afflictions often go round the temple, chanting the Swaminarayan Mahamantra all the while which is said to offer relief from their distress. Several Aartis are held during the course of the day, with thousands of people witnessing the rituals. After completing worship, devotees are given a bag of Prasad and then many head for the dining hall where food is served free for all visitors. There is also a well which is reportedly 350 years old, whose waters are considered holy and many people collect some to take away, which is used on religious occasions.

The Temple is famous for its architectural design and pays tribute to the unique Indian style of temple architecture. This Shrine is built under the guidance of the Swaminarayan Trust and incorporates the same style and features of these famous religious shrines.

Hanuman Jayanti Mahotsav, during the month of Chaitra is celebrated with great fanfare and enthusiasm in the temple and is said to be the most auspicious time to establish a direct connect with the Lord. Devotees flock to the shrine during this period and partake of the Lord’s blessings.

Sundar Kand is celebrated during the month of October or November and depicts the adventures of Hanuman in his various forms. Special prayers are offered to the Monkey God during this holy period.

Holi is the festival of colors associated with the harvest season and also signifies the victory of good over evil. This festival is a joyous occasion celebrated with great fervor in the temple with thousands taking part in the proceedings.

Benefits or Blessings of the primary deity- Sarangpur Hanuman Temple

Tuesdays and Saturdays are dedicated to Lord Hanuman and special rituals are conducted at the Sarangpur temple on these days. The shrine witnesses unusually large turnouts on both these days, with many coming to rid themselves of physical and mental disorders. People offer special prayers and Pujas and pray for strength to overcome their problems.

Many ritualistic ceremonies are conducted for those suffering from mental illness, stress and other disorders. The temple is also famous for exorcising spirits and ghosts from people allegedly possessed with evil spirits. Victims of witchcraft and black magic are also delivered from their suffering by having holy Darshan of Lord Hanuman. Hanuman is also known as Sankatmochan-the dispeller of troubles and chanting the Swaminarayan Mahamantra or the Hanuman Chalisa is a sure-fire way of appealing to his benevolent nature.

Location – How to reach the Sarangpur Hanuman Temple

The Sarangpur Hanuman temple is a world famous Hindu pilgrimage center and offers many facilities for visitors. It is accessible by several modes of transport and Dharamshalas are available for people who wish to stay overnight.

By Air: The nearest Airport is located in Ahmedabad at a distance of 159 kilometers. Taxis are available from the Airport to the Sarangpur Hanuman temple.

By Train: Botad junction is the closest railway station located at a distance of around 73 kilometers. Taxis and buses are available from the station to the temple.

By Road: Regular buses ply from Dhanduka taluka (50 kilometers away) to Sarangpur.